Here is who I believe which players have a real shot at winning MVP for this upcoming season. In order here I go.

This will be his breakout year for the league because of the Lakers aura around him.

Was the best player in the league last year until the ECF, I believe he will come back with full vengeance.

A walking triple double, which will lead to a lot of victories!

Has a chance to take over the crown for best player in the east!

He will be always be in the top 5 in MVP voting. He’s to good!

He has something to prove again!

To add to his HOF resume!

The taste of going to the western conference finals could end up the start of his MVP historic season.

Prove to the world that he is capable of being that guy! He’s a dark horse in this race.

All 10 of the players that I mention have a great shot at winning MVP.

But who wins it?

Which player do you think I left off that has a chance to win MVP this season?

I left off Paul George due to his previous injury so he’ll be missing some time this season. (Injury-Shoulder)

I think Stephen Curry has at least one 60 + point game in him this season. Do you think that’s possible? Who’s ready to see Stephen Curry make it rain from deep? I am ready to see if he can be a top 5 scorer again in the league. For this upcoming season I believe it is absolutely possible he could average damn near 30points per game. The greatest shooter of all time will have no limitations as we’ve seen the last few years . He will be the clear the #1 offense option again. My only concern will coach Steve Kerr put Stephen Curry on a workload minutes restrain? The warriors only concern is making it to the playoffs healthy!

Stephen Curry will make over 400 3pm this year. He is the only player in NBA history with that record. I believe this year he doubles it up.

Here are some secrets that help Curry from his trainer.👇🏽

Are we all under – estimating the New York Knicks for this upcoming season?

Naaaa lol. Because they won’t be making the playoffs. But I will be the first to admit that their future is bright in the east! I like a lot of their young talent. I like the fact that their young players are able to play a lot of minutes. The minutes they play this year will be the cornerstone for their future. We will get to see how well this teams competes with tough competition.

For this season I can see the New York Knicks in a lot of competitive games. That’s not saying much but watch out for that. Building Rome didn’t take one year. 👀👀 it took several years. The Knicks are on that long path for good things to come.

Can this young squad gel to win over 30 games? 🤯

I believe they are capable of winning a few more games then they are projected. Which is around 27.5 wins according to actionnetwork.

I personally like the New York Knicks coaching staff , I like what they got going on. Coach Fizdale is the perfect coach for them as well. I like this young roster because they’re all young and they all can grow together. They have a lot of young talent at different positions , let’s be honest! The New York Knicks are a building a team that could compete in the playoffs and possible NBA championship for the next 10-12 years if they can keep majority of their pieces.

Let’s get introduced to the young squad who I believe should be the core moving forward. If these players are able to gel together they will be extremely interesting to watch. 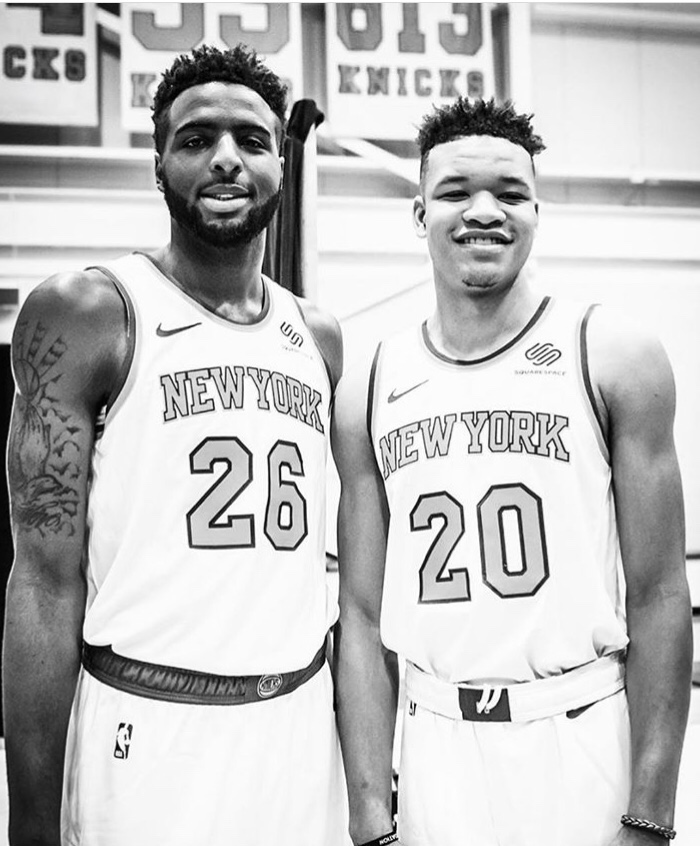 I give this core of the players I just mention a window of 2-3 years where they will be taking serious in the east. But that’s if the New York Knicks are patient.

-SUCCESS IS MY MINDSET –

This chart below shows what Chris Bosh and Kevin Love accomplished in their first year playing with Lebron James. Clearly Anthony Davis situation is completely different because he won’t be taking a backseat or playing 3rd option.

What can you see Anthony Davis do this upcoming season? Will his numbers regress or will he they heavily improve?

More than likely improve because if they don’t then the Los Angeles Lakers won’t win as many games as we predicted. Now I am not saying Anthony Davis needs to put up Wilt Chamberlain type of numbers every game but he does need to be dominant. This year he has to play like a top 3 player in the entire league. Why? Because he is fully capable and he has Lebron James. This will be the first time in Davis’s career where the spotlight will shine ever so brightly on him.

I’ve heard that the Lakers are willing to run their offense through Anthony Davis. Which I agree will be smart and effective because AD can you get you 25p 12r in his sleep.

This year will be the first time in Lebron James career where he will be not be the first option. How will he handle that?

Anthony Davis already looking comfortable in his new home. I know I’m jumping the gun but I am looking forward to seeing what he can do in this year’s playoffs.

Luka Doncic vs The league

A walk through Derrick Rose career

Mind you Kevin Durant has averaged over 25Points per game within the last 7 seasons. Check it out 👇🏽

The last column shows his scoring per game from the last 7 years.

A lot of Kevin Durant shots come from the mid range.

Within those 7 years I have found 2 shot charts from different years. The efficiency is unreal from mid range! The first chart is from 2017-2018 season.

The second chart is what he did in his last year with the Golden State Warriors.

Brandon Ingram or Kyle Kuzma? Who will have the better season in 2019-2020 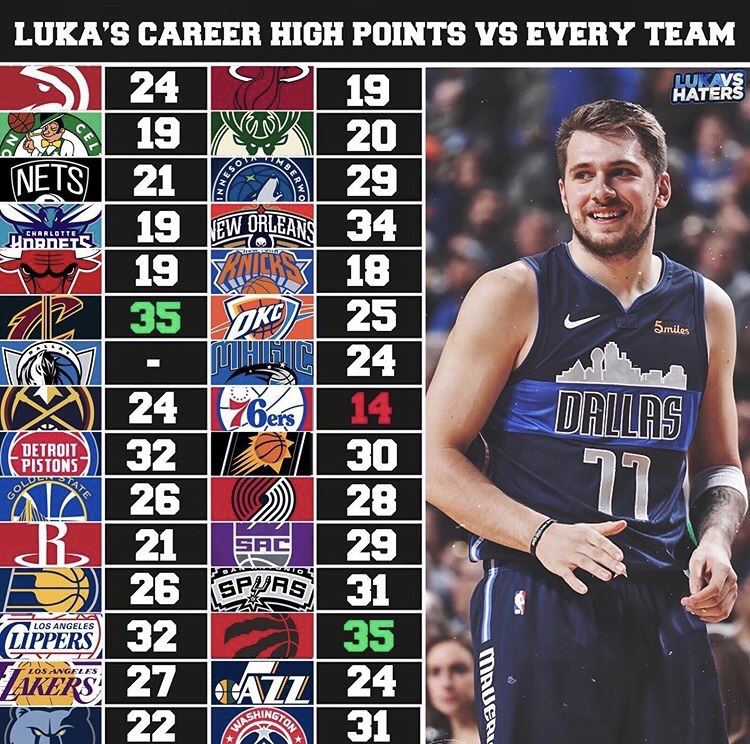 Will Luka Donic score more than 45 Point this year?

I can most definitely see that happening. Why ?

Because he’s heading into his second year knowing his role on the team. Of course the ball will be in his hands even more than it was last year. Dallas has put their franchise in this young kids hand. There will be no question he will start out as the Mavericks 1a/1b Option along with KP. I expect Luka’s usage rate to be in the top 5 of the league.

Luka Doncic has a lot to prove. He looks motivated and also in much better shape than last year.

Is is destined for Luka Doncic to be an all time great?

For me this is an easy question because he’s must watch and great competitor I love the flare in his game. As long as he stays healthy we will see battling for a title for many years to come!

What do you think his season high will be this upcoming season?

Check out his funky shots:

Luka has hit some crazy shots in his basketball career🔥 – Which was your favorite?👇 ————————————— Follow @mavsmastermind for more daily mavs content!

Brandon Ingram or Kyle Kuzma? Who will have the better season in 2019-2020

So as we all know Dwight Howard is back in Los Angeles.

Last time we saw him in LA he was playing on a broken back. Kobe Bryant destroyed his ego and kick him out of town. Funny but seriously that’s what happened!

What will LeBron James do if Dwight Howard doesn’t live up to expectations?😅

Im not sure who or what the notion is that somehow Dwight Howard isn’t a serviceable big man. Because clearly the stats say otherwise. I must point out that last year stats are slightly skewed because in with the Wizards he only played 9 games.

Dwight should fit in well with his new team. He still can put up more than capable numbers as a big men. He’s capable of running the floor with ease as he has always kept himself in great shape. This is the year to show us that you got heart bro.

Dwight won’t get a lot of plays run for him so he’ll have to solo focus on defense , effort and rebounding. Also he has 15 year in the game. That basketball experience will definitely help! He will be entering his 16th year this upcoming season.

Will Dwight Howard be focused on and off the court?

This year he will have a legitimate shot at contributing for a title. All his focus should be on how to become a NBA champion.

If the minutes are there he can still average anywhere from 12-16 points per game with 10 rebounds.

The Lakers should dominate teams on the glass every night!